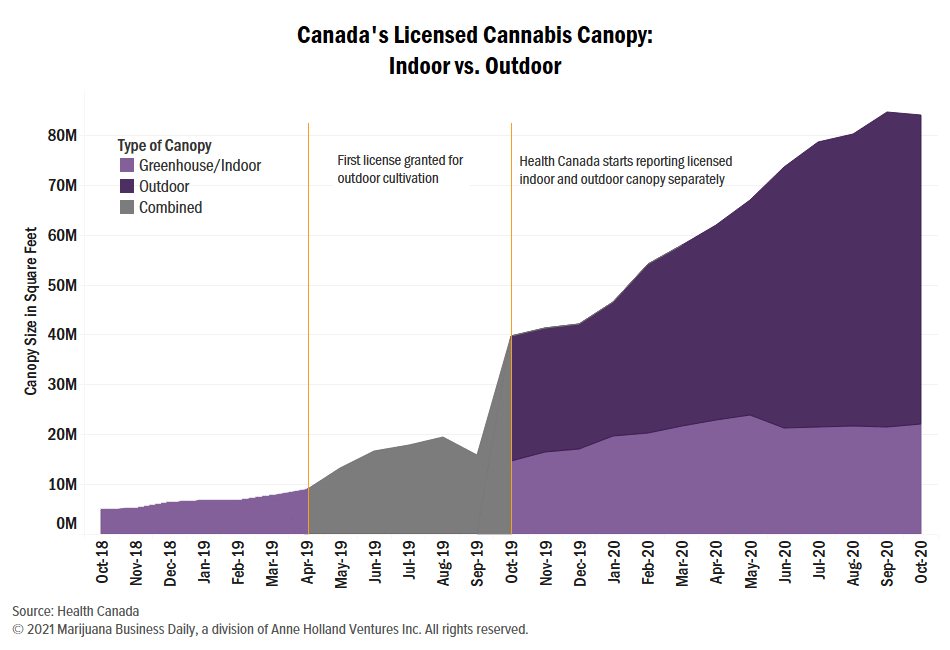 In a note to investors, Bennett said the glut would not impact all producers equally.

“A large glut of outdoor grow is likely to affect pricing in the value and deep discount segment most, both in flower and extracts,” Bennett wrote.

“If any Canadian name is very dependent on the discount segment, yet doesn’t have industry-leading costs of production, it may struggle to compete on price and could see sales suffer.”

Last week, MJBizDaily reported that Canada had amassed a staggering 1.06 million kilograms of cannabis inventory – equivalent to more than 1 billion grams. The surge was evident in Health Canada’s recently released inventory data for October, when most of the fall outdoor harvest comes in.

Most of the stock – some 95% – was with federal license holders, which have been stuck with large storage bills, and eventually write-downs, as the value of the product falls over time.

In a previous note, Bennett said producers “skewed to discount, names that have very low costs of production and can absorb these additional pressures should be better placed than those that can’t.”

Some of the largest Canadian producers have been reeling after massively overinvesting in greenhouses and M&A between 2017 and 2019.

As far back as three years ago, MJBizDaily reported that the largest producers in Canada had bankrolled more than enough canopy to meet demand product in the early years of the recreational market.

But they kept building, buying and spending – resulting in billions of dollars in write-downs in ensuing quarters.

Recent outdoor harvests have only compounded some of the industry’s supply issues.

But the amount of licensed outdoor growing area in Canada more than doubled between October 2019 and October 2020.

Matt Lamers is Marijuana Business Daily’s international editor, based near Toronto. He can be reached at [email protected].