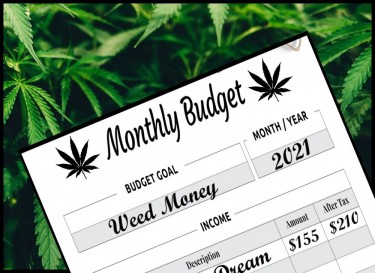 This is not an article talking about how much weed costs. Those types of articles tend to be short lived and highly subjective depending on your geo-location and surrounding laws.

This question is rather about ‘how much you should budget’ for weed per month. Are you spending too much on weed? How does your consumption habits compare to the national average. Yes – you read that correctly. There is now a “National Average” that consumers in legal states spend on cannabis. What times we live in!

With the data streaming in, we need to start looking at other factors. You see, most of the research into cannabis is conducted through a pathological lens. This means that ‘cannabis’ is always seen as something “wrong” and all behavior associated as such is that of an “addict”.

This is not an honest representation of what it means to be a consumer. In fact, some people can become dependent on cannabis. Yet under the standards of the DSM–5, it would seem that virtually every recreational cannabis consumers would classify as “dependent”.

This article wishes to create a more nuanced perspective on the issue. What about bulk shopping? What about utilizing cannabis for health and wellness?

These factors impact how much you spend on cannabis and how much you consume. It’s not the same smoking a joint to get high than it is to treat chronic back pain. The latter would require a higher consumption and the euphoric effects of cannabis would be diminished.

Yet the research funded by your tax dollars simply don’t make these distinctions.

Fortunately, for us, money-hungry corporations spend billions of dollars to understand consumer trends and hire marketing companies to create profiles on consumers and measure virtually everything they can.

Some companies have a special nickname for you in what they call “Buyer Personas”. So maybe you’re a Jimmy or a Susan or Randy to some of your cannabis brands.

Based on this research, we can surmise exactly how much the average consumer spends per visit and per year. Judging by national averages, you can see whether you are consuming far more or far less and make an educated guess as to why.

As mentioned, medical users tend to have a higher consumption requirement and thus if you include cannabis as a medicine, you’ll probably have a higher yearly bill.

According to Headset Inc’s research, 79% of the people who consume cannabis do it “to have fun” when asked on motivations for recreational use. However, for medical purposes many claimed for better sleep and pain management.

That comes to $53.75 per month according to the research. While some of you may be saying, “wait a minute, I spend way more than $53 per month…am I addicted?” I think this research is only accounting for “legal cannabis consumption” because anyone reading this with experience in cannabis knows that you can buy far more weed on the streets than in a dispensary.

But that doesn’t mean you don’t go ahead and splurge at the dispensary every now and then. Within the report itself it also noted that the average consumer spends between $500 and $2500 a year. And that’s how you get the average of $645.

I think if we’re looking at regular consumers, the margin of cost should range between $900-$1200 per year.

For medical consumers, that number is anywhere between $1,000-$2,500+ per year depending on the condition being treated.

What’s the golden number for a regular consumer?

If we’re taking a look at the prices presented to us in the research, and simply inferring from my 20+ years of smoking and buying weed everywhere – and hanging out with thousands…nay…tens of thousands of stoners from all across the globe – the average consumer should spend anywhere between $53 – $90 per month. Above the $90 range, if you’re not consuming for medical purposes, you are consuming above average.

Is this a bad thing? I don’t know, I’m not a fucking doctor! What I do know is that if you’re buying quality weed you wouldn’t need to consume ‘that much weed’ to get high. If you’re smoking that much weed and still not getting high – then you may have an underlying issue you’re trying to avoid.

As to justifying it in your budget? Well, if you consider it as recreation or medicine – $90 is really not that much per month. It comes down to $22.50 per week on the high end and $13.45 per week on the low end.

BUT WHAT’S THE MEANING OF IT ALL?!?

I don’t subscribe to the philosophy of telling people what to do or not to do with their lives. I do believe though that having valuable insight allows people to make more educated choices about their behavior.

If you needed to have a measurement of how much weed you’re consuming compared to the rest of us – now you do. What you do with this information is entirely in your hands. Increase, decrease, budget it differently – go to town. It’s your body after all.

MARIJUANA ON A BUDGET, YOU BET, READ MORE… 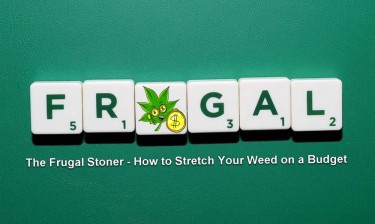 MARIJUANA ON A BUDGET, HERE IS HOW TO MAKE IT LAST!

HOW TO SAVE 50% OF YOUR WEED BUDGET WITH ONE CHANGE!