CANNABIS CULTURE – Fate Vincent Winslow, a Louisiana man sentenced to life in prison for selling twenty-dollars worth of cannabis to an undercover cop — has been released.

Winslow, 53, was arrested in September of 2008 in Shreveport, Louisiana.

At the time, he had been homeless and was looking to get his life together. The officer, in plain clothes, offered him a five-dollar bonus to be the middleman in the transaction. The officer also asked for a prostitute, which Winslow did not procure.

Back then, Winslow had no history of selling drugs and was not a known drug dealer. The dealer that sold Winslow the two dime bags, who was white, was not arrested despite having the marked $20 bill on his person and the officer witnessing the transaction. 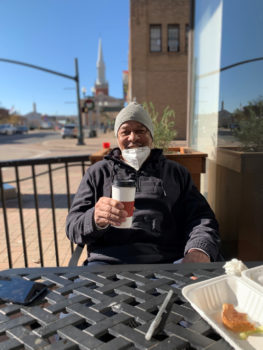 Fate Vincent Winslow enjoys a coffee after his release.

After an hour of discussion in court, the 10 white jurors voted guilty, while the 2 black jurors voted not guilty. The state of Louisiana only requires 10 out of 12 jury members to agree to convict.

Since Winslow had three strikes on his record over a span of 20 years, from two unarmed burglaries and a cocaine possession, his sentence was increased to life without parole due to the state of Louisiana’s 4 strike policy. Winslow was 41 at the time of his sentencing.

Thanks to efforts spearheaded by Innocence Project New Orleans (IPNO), Winslow was resentenced to 12 years in prison with credit for time served. He was released last month after the Department of Public Safety and Regulations finished recalculating his sentence.

In an IPNO press release, Jee Park, Winslow’s attorney, and executive director of IPNO stated, “There are hundreds of individuals serving life sentences for nonviolent crimes in Louisiana. In fact, Louisiana has more individuals serving a life sentence than Texas, Arkansas, Mississippi, Alabama and Tennessee combined, and a disproportionate number of these individuals are Black men. Instead of throwing the book at Mr. Winslow and sentencing him to life imprisonment just because we could, does not mean that was constitutional, legal and humane. He received an obscenely excessive sentence given his life circumstances and crime, and today, we are correcting that unconstitutional, inhumane sentence.”

According to a study by the ACLU, 79% of prisoners serving life without parole (LWOP) were “sentenced to die in prison for nonviolent drug crimes.” They estimated it costs American taxpayers $1.784 billion to uphold LWOP sentences.

Upon release Winslow was reunited with his daughter, Faith, and his two sisters Nikki and Mildred. His mother died while he was imprisoned.

A fundraiser has been set up by Winslow’s family to help begin his new life. All the proceeds will go directly to Winslow. If you would like to donate please visit Fundraiser by Faith Canada : Fate Winslow to Walk Free After 12 Years in Prison (gofundme.com)