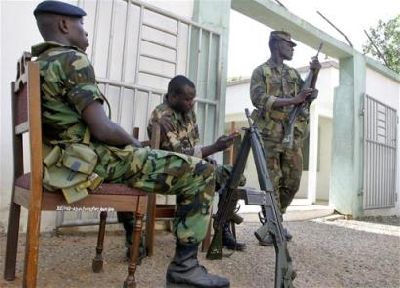 These are unsmiling times when security is mentioned in Ghana, the so called thought to be one of the safest countries in Africa. The obloquy and insecurities are one too many for many discerning citizens like my very humble self to turn a blind sight as if all is well. If Ghana will stand the test of time in the dispensary of peaceful elections come 2020 then, it’d require timely interventions from Government and unfortunately, the international community.

I say unfortunately, the international community because then, it’d beg the question of our sovereignty, liberty and competence of managing and steering the wheels of our own affairs as a so called sovereign country. A police woman was shot and killed on the kumbungu road in the Northern Region by alleged armed robbers. If security personnel responsible for maintaining law and order are getting gunned down, then it presupposes and puts to bare how incompetent our security agencies have become. Some seven or so young men in this country were targeted and shot to death by the police.

The Ghana police later made emphatic official statements which stated categorically that they were armed robbers who engaged the police in a fire fight. This unintelligent theory raised many eye brows with some of us questioning why at least one police officer didn’t sustain a bruise. Subsequently, upon thorough investigations it turned out that they were killed for nothing and that, they were actually not armed robbers. Now! Pause for a minute and retake that sentence again. “They were actually not armed robbers. “ Wow! That sends shivers down my spine because in simple terms it means I could be targeted, shot and killed by the Ghana police, yet tagged and framed an armed robber who engaged the police in a fire fight when I have never held a fire arm in my entire life.

From that moment on, I reaffirmed how incompetent our security agencies can be. This was not a case of second guessing. The type of lackadaisical and lukewarm attitude posturing they exude when you go to report a case is appalling and distasteful. And when they do attempt to pay you any attention all, it appears as if though they almost attempt to bury you in paper work to scare you off with boredom. Finally after you’re done, they give you the well rehearsed chorus they all seem to know how to sing so well which goes like “Go! You’ll hear from us.”

And that ends it unless of course you’re a politician or a well known affluent personality in society, the police would never take your case seriously and this is seemingly becoming a case of selective justice . And this worries me so much that I can’t grasp or come to terms why people will settle on a certain profession but would suddenly lack the knack, zeal and confidence to perform their duties diligently. In lieu of taking it more seriously and professionally, they indulge in tactful dilly-dallying and taking snail steps in investigative processes to secure actual prosecution for law-breakers.

At a by election at Ayawaso we all saw what happened. A committee was setup and till date we are yet to ascertain the findings and possible remedies reached to nib such un-palatable incidents in the butt moving forward into the future with a major election next year staring us right in the face. Again, that worries me. When I talk about security, it is imperative I keep making inferences to the gross misconduct and apathy demonstrated by our security agencies in the dispensation of their duties because tax payer’s hard earned income of sweat is allocated to pay them to keep us safe. It is a known fact in this country and in fact, it has been for quite sometime now, that every Tom, Dick and Harry in this country knows that some police men on our roads take bribe and allow some recalcitrant drivers on our roads causing preventable accidents leading to untimely deaths of many. Yet nothing is done about such miscreants. Among the many stunts of incompetency, you find a sitting CID Boss of the police making public statements which pointed out to the fact that the police knew where that Tarkoradi Girls were and will go rescue them. It turned out to be a blatant lie and facade. A charade and a mockery of the pain the parents of the victims are going through.

If the mother hen peddles falsehood as a trade what do you expect her chicks to do if not peddle the same. That’s how come some police men on duty in the Western region aided and abetted the escape of the known Nigerian suspect after he was apprehended. Fortunately, in court be stated unequivocally that, some police men aided his escape and that he alone couldn’t have perpetrated the crime in solitude. This appeals to logic and common sense. Yet no sanction is metered out to police culprits. That notwithstanding, in all fairness it’d be unfair to the many decent young men and women who in all honesty risk their cherished lives to keep us safe. Amongst the bad nuts there’re honest police people in this country who take their job seriously. The problem here is that they’re but a few. We all recall the Canadian girls who were kidnapped. And how swiftly they were rescued unharmed.

Now, we had the Information Minister Mr. Oppong Nkrumah mount media platforms to divulge that their rescue had nothing to do with foreign intelligence or interventions and that it took the sole efforts of our gallant men in uniform and operatives of the national security to rescue the Canadian girls. So I ask, where are those gallant men in uniform now? Our Tardi girls are still missing.#Bringback_ourTardiGirls . It is sad and sickening when we play politics with tragedy to gain political clout. I cannot leave out the Chereponi crisis that claimed lots of lives before security agencies intervened.

The state of security in Ghana is in bad taste. Ahmed Suale was shot to death multiple times close to his house and yet the perpetrators roam freely amongst peaceful citizens. So how safe are we as a so called Peaceful country.? A prison was broken into to free people who had broken the law and nothing has happened to them. The state of lawlessness is frightening. How safe are you and I? Well….