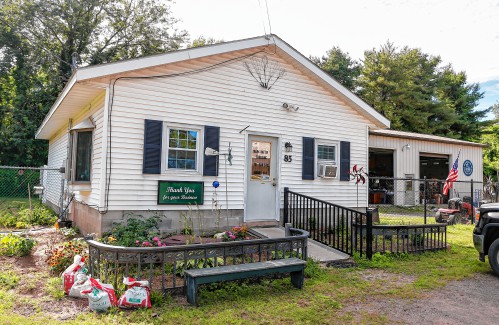 WHATELY — The recreational marijuana dispensary that town officials approved a host community agreement for last year has since received its license from the state to operate.

Gaston said she expects the 1,000-square foot adult-use recreational marijuana dispensary at 85 State Road — formerly the home of 1 Call Does It All real estate liquidation — to be ready to open by spring 2021.

“We’re going to start to do the buildout of the site, get everything right on the inside and the external appearance,” she said.

Gaston noted plans for a parking lot and landscaping, as well as a full renovation of the existing space, including upgrading the septic system.

The process for getting approval for the dispensary began in late 2018. Gaston said it required traffic studies and seeking input and approval from various town boards, including the Zoning Board of Appeals and the Selectboard.

In June 2019, Gaston secured a host community agreement with the town. In August 2019, the ZBA granted her a special permit after an extensive review of proposed security, odor control and architectural design. August of last year was also when Gaston began the application process through the Cannabis Control Commission.

Gaston, who resides in Connecticut but has connections to Franklin County as she was born in Greenfield, said down the road, she hopes to have her own cultivation site for “true seed to sale.” Until then, the dispensary will work with currently approved cultivators and manufacturers in Massachusetts.

“It’s basically myself running it now,” Gaston explained. “I want to have my daughters involved. … It’s just going to take a little bit of time to get the (cultivation site) going, and as soon as we can, we’ll have our own boutique brand.”