His administration has been studying the issue and many details remain unresolved, but Northam said he intends to emphasize public health protections and social equity issues as the state moves forward.

He will of course have to deal with the Virginia Senate which looks as though that’ll be the biggest test for him.

We also have to note this photo which caused a national scandal (as it should) and politics being politics doubt and confusion were sown.

On a Friday evening in February, Gov. Ralph Northam of Virginia confessed that he was one of two men in a racist photograph that had been published in a medical school yearbook about 35 years earlier. In a subsequent video, he apologized and promised to do better.

The next afternoon, standing before a throng of reporters, the Democrat suddenly recanted, and insisted that neither man in the picture, which showed one in a Ku Klux Klan robe and another in blackface, was him. 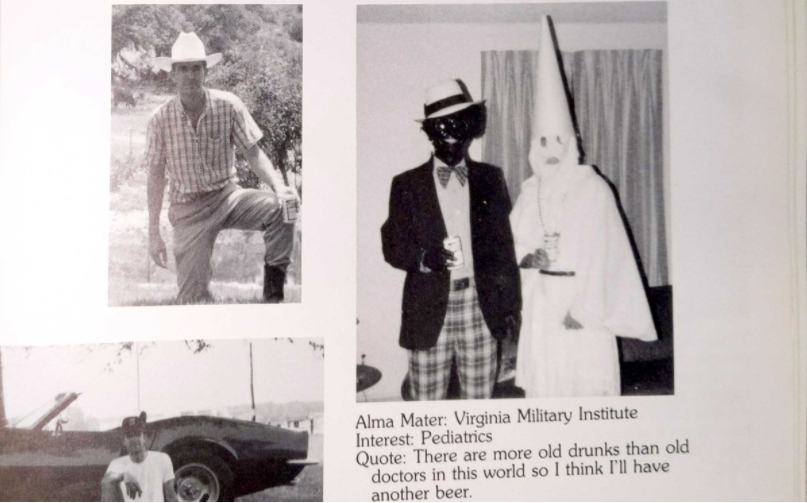 On Wednesday, almost four months after the photograph surfaced and plunged Virginia’s government into turmoil, investigators said they had been unable to determine which of Mr. Northam’s accounts was true.

“No one we interviewed told us the governor was in the photograph, and no one could positively state who was in the photograph,” the investigators, hired by Eastern Virginia Medical School, which awarded Mr. Northam his medical degree in 1984 and had been aware of the image for years, wrote in a 55-page report.

Gov. Ralph Northam said Monday he plans to propose legislation legalizing marijuana when the General Assembly convenes in January, setting the state on a path to become the first in the South to allow recreational use of the drug.

“We are going to move forward with legalizing marijuana in Virginia,” Northam said. “I support that and am committed to doing it the right way.”

Northam, a physician who says he’s never used the drug, cautioned “it’s not going to happen overnight,” saying he envisions an 18 to 24 month timetable for the state to establish and regulate the new marketplace.

His administration has been studying the issue and many details remain unresolved, but Northam said he intends to emphasize public health protections and social equity issues as the state moves forward.

“Marijuana laws have been based originally in discrimination and undoing these harms means things like social equity licenses, access to capital, community reinvestment and sealing or expunging people’s prior records,” he said.

Lawmakers in the House of Delegates say a legalization bill would likely pass the chamber. In the Senate, Majority Leader Dick Saslaw said last week he gave it “slightly better than 50-50” odds.

Northam’s comments came on the same day as state analysts presented a sprawling study of the potential impacts of marijuana legalization in Virginia and things lawmakers should take into account as they discuss it.

The Joint Legislative Audit & Review Commission study found that legalization could generate more than $300 million per year in tax revenues by the fifth year of operations and, combined with decriminalization, could reduce marijuana arrests by 84 percent. Legalization could also create more than 11,000 jobs, the study found, but most would be lower-paying positions in retail, cultivation, packaging and security.

If Virginia chooses to legalize adult use of marijuana, it would likely take at least two years to put a regulatory structure in place and begin licensing companies to operate in the state, according to the study.

While the study found that very few people are jailed solely for marijuana possession, JLARC staffers found that 120,000 Virginians might benefit if the General Assembly paired legalization with a one-time expungement of pot charges that wouldn’t be crimes anymore. More than half of those people would be Black Virginians, who are arrested for marijuana at a much higher rate than White Virginians, according to the study.

Read the full article at

Northam: ‘We are going to move forward with legalizing marijuana in Virginia’