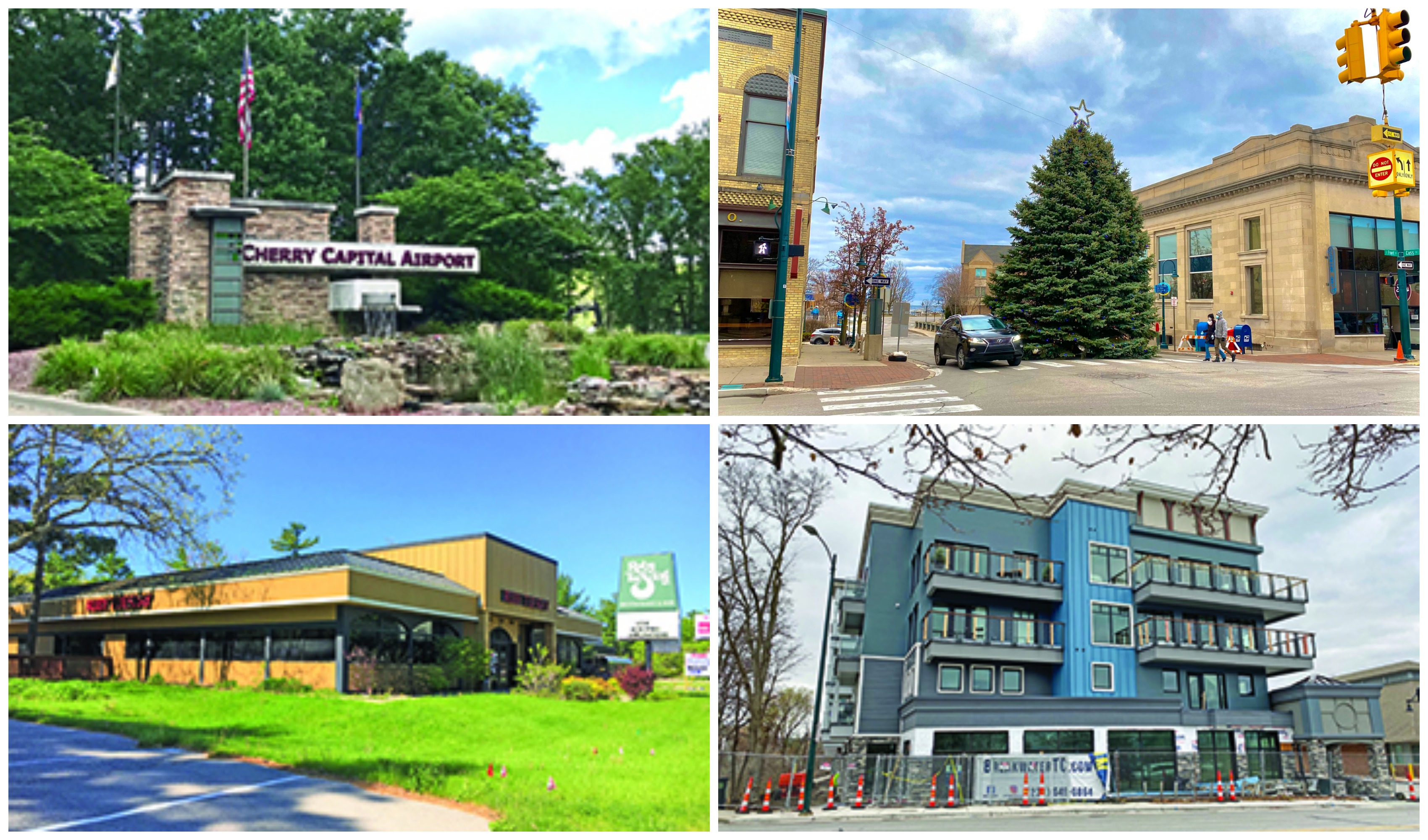 It’s 2021, and thanks to the Traverse City Business News, here’s a glimpse of what we’re watching in and around Traverse City as the New Year begins.

Weed In The City
2020 was a year of upheaval in Traverse City’s burgeoning marijuana industry. On one hand, a dozen medical marijuana establishments officially opened their doors. On the other, critics have accused the Traverse City Board of Commissioners of dragging their feet on bringing recreational marijuana into the city.

With four lawsuits pending against the City of Traverse City regarding its handling of marijuana licenses, City Clerk Benjamin Marentette warns that recreational cannabis sales aren’t likely to commence in the city any time soon.

Michigan voters legalized adult-use marijuana in November 2018 and recreational sales have officially been allowed in the state since Dec. 1, 2019. The City of Traverse City has thus far opted out of allowing recreational marijuana businesses within city limits, with the reasoning that delaying licensing would allow city commissioners time to determine how to regulate these types of businesses.

In August, the city commission approved new rules that would have opened the door for recreational marijuana dispensaries in Traverse City. The rules ignited an uproar and led to the filing of three lawsuits (to date) against the City of Traverse City. A fourth cannabis lawsuit facing the city pertains to medical marijuana.

Marentette says that recreational cannabis is indefinitely stalled. His office has received two applications so far for non-dispensary businesses: one for a grower, one for a safety compliance facility. But per a ruling from the 13th Circuit Court, the city cannot accept applications for recreational marijuana dispensaries or microbusinesses until further notice.

“Because of the lawsuits the city is facing, Judge (Thomas G.) Power ordered that my office not begin accepting applications until further order of the court,” Marentette said. “There’s a lot of complexity to the lawsuits filed against the city that may or may not shape (the city’s timeline on licensing or store openings).”

Grand Traverse and Leelanau county commissioners voted in December to create an independent airport authority, such as what Gerald R. Ford International Airport in Grand Rapids and the Detroit Metropolitan Wayne County Airport are governed by. Currently, TVC is owned jointly by Grand Traverse and Leelanau counties and is governed by the Northwest Regional Airport Commission (NRAC).

As an independent authority, the two counties would still appoint board members, but the airport would have greater independence and autonomy to buy and sell property, control its own zoning, set standards for board members and remove board members that don’t meet standards or fail in their duties.

As part of the post-approval process, the Federal Aviation Administration (FAA) will need to sign off on changing the airport’s operating certificate. The review process is likely to take about nine months.

One area of interest is the stretch of U.S. 31 from Five Mile Road to Eighth Street, once referred to by locals as “restaurant row.” Many of the restaurants along that corridor have shuttered; those spaces all remain vacant heading in 2021, but at least one of them should be seeing some action in the New Year.

Nick Spallone is the designer for a new luxury car wash called Green Mitt, set to take over the 1840 U.S. 31 site previously occupied by Hooters.

Mark Hagan of Coldwell Banker, who represents the Ruby Tuesday property, says he’s had “a lot of larger chains that have expressed interest, kind of from all over the country,” but that “nothing has come together yet.”

Old restaurant buildings aren’t the only commercial properties along U.S. 31 sitting vacant. Two hotel developments along that corridor – one between Four Mile and Five Mile roads, adjacent to Hopscotch Brick Oven and Tap Room; the other between Hampton Inn and the Traverse City State Park – appear to be stalled.

Away from restaurant row, East Bay Township could see some other development activity in 2021. An “upscale manufactured home community” called Alta Vista is planned for the 80 acres of vacant land east of Grand Traverse Academy, between Hammond and Vanderlip roads. Developers say construction will begin soon on the 165-unit community, with a three-phase buildout set to begin in February.

Hot Housing
With real estate demand in Traverse City holding strong, developers are boosting the area’s apartment housing stock. Here are just a few of the projects on the horizon:

Breakwater: Breakwater on Garland Street is a new 77-unit mixed-use development that is just a stone’s throw from the Open Space. Steve Poole, the real estate agent representing the three commercial units on the ground floor, says to his knowledge the apartments are nearly 100% rented.

Ruth Park: Ruth Park is a planned 58-unit apartment complex on Wellington Street, across the street from Safe Harbor. It was approved in October for $1.2 million in funding from the Michigan State Housing Development Authority (MSHDA), which will help fund the $14.1 million project.

DDA projects: The DDA is assisting with multiple projects. One is a mixed-use development planned for the spot currently occupied by parking lot G next to Mode’s Bum Steer. The DDA is also collaborating with Great Lakes Capital, a real estate private equity firm, on bringing two projects to downtown TC. One is planned for 309 W. Front St. next to the new 4Front headquarters. The second, another four-story mixed-use project, would take up residence in the long-vacant site next to J&S Hamburg, with approximately 80 new apartment units included.

Mosser apartment complex: A potential 168-unit apartment complex on the south side of Hartman Road is in the preliminary stages in Garfield Township – but is facing potential hurdles due to the parcel’s proximity to Miller Creek Nature Preserve. The complex would include three seven-story apartment buildings, as well as a clubhouse and pool area.

U.S. 31 South apartment complex: A 60-unit apartment complex has been proposed for a 1.6-acre parcel off U.S. 31 South, between Hartman and South Airport roads. The proposed site – which Garfield Township Planning Director John Sych says is a “nice fit” – falls in the middle of several commercial structures near Grand Traverse Mall.

Also on the way are several luxury condo developments, including long-gestating projects like Peninsula Place on State Street, 539 Bay Street and newer ones like Fresh Water Flats on Gillis Street.

Racial Reckoning
2020’s racial unrest sparked the birth of Traverse Connect’s Diversity, Equity & Inclusion (DEI) Committee. The committee, which consists of members from across the business community, has a goal to “lead the community in becoming a region that is attractive and enabling to people of all diversities – racial, cultural, social economic and ability.” The group will host a DEI summit on March 11, with the aim of educating local businesses about the value of diversity and providing resources that can help businesses embrace DEI.

Relocating To Traverse City
The Traverse City real estate market has rarely been hotter. According to the Traverse Area Association of Realtors (TAAR), November sales for the five-county region hit a record high of 350 homes totaling $136.64 million.

According to Warren Call, president and CEO of Traverse Connect, the real estate trends dovetail with other metrics to prove that more people are moving to Traverse City.

Spurred by a range of factors – higher COVID-19 case numbers and more stringent pandemic restrictions in densely populated areas, more companies allowing their employees to work remotely on an indefinite basis – city dwellers spent 2020 relocating in droves. According to the United States Postal Service, nearly 16 million American filed change-of-address requests between February and July, up more than 600,000 from the same period in 2019. Based on TAAR’s November real estate numbers, at least some of them are moving to Traverse City.

According to Call, a company called EMSI releases an annual talent attraction scorecard that ranks every county in the country. The 2020 version scores Grand Traverse County 81 out of over 2,200, small- and mid-sized counties in the country.

“So the timing has been fortuitous, because as the crisis struck we were already getting all these people that probably already had some inclination of moving here,” Call says.

NMC Student Surge
At Northwestern Michigan College (NMC), the New Year is ringing in an out-of-the-ordinary surge in students.

They’re coming from one – possibly two – fronts: The state’s new Futures for Frontliners program that offers free in-district community college tuition to essential workers who don’t have a college degree; and another new statewide program called Michigan Reconnect, aimed at filling the state’s skills gap by helping adults over age 25 earn a degree or certificate.

Potential student numbers from Michigan Reconnect won’t emerge until its application period opens in February, but Futures for Frontliners began adding NMC enrollment with this month’s start of spring semester.

As of early December, 1,465 students had applied for the Frontliners scholarship. Students through the Michigan Reconnect program will likely enroll starting in the fall.

Both programs could boost NMC’s profile as an education and skills provider, which in turn could help the college with a continuing goal: attracting and offering aid to some of the approximately 19,000 people in NMC’s six-county area who have some type of college experience but no degree.

Read the rest of the “What To Watch” list in the January TCBN, including: